In our Challengers series, we interview experts in the challenger banking field, with a focus on the impact of COVID-19. In this installment, we got the chance to speak with Rik Coeckelbergs, CEO and founder of The Banking Scene. 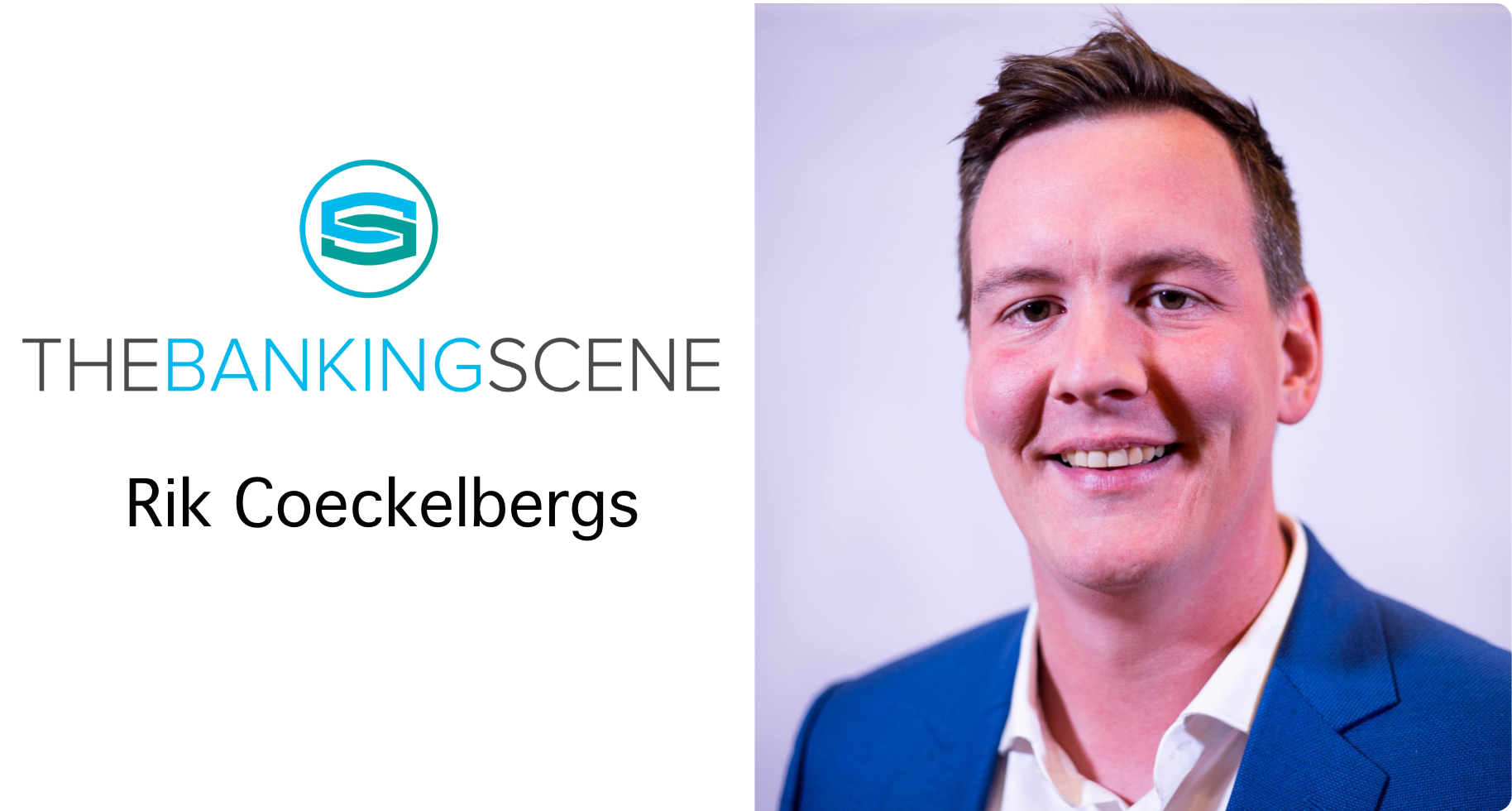 Hi Rik, thank you for joining us today.

Would you like to begin by introducing yourself and your background?

I am the founder and managing director of the Banking Scene. The Banking Scene is an informal network organization for bankers, mainly focused in the Benelux region. I organize conferences that revolve around the banking sector, and this allows me to dedicate a lot of time and energy to market research to develop my own ideas on how the industry is evolving. Keeping informed about news in the industry and attending international conferences gives me a good context of what is going on.

How does The Banking Scene currently operate?

Recently we started a new initiative due to COVID 19 called The Banking Scene Afterwork. We host weekly sessions every Thursday, each week with a new central guest and topic focused on the current banking industry. The idea is not to have a bilateral interview but an engaging discussion around the topic. Thus far, we have discussed issues including avoiding the missed opportunities in a crisis like COVID-19 and the how the virus has changed relationships between fintechs and banks.

What are some general insights you could share on the challenger banking industry?

The general news is that Challengers are facing a tough time. There is a difficulty in convincing consumers to stay with them. Is this because consumers tend to go back to basics in the time of crisis, where they know they can get a complete service at their trusted bank? At the moment, people are not traveling anymore, so the incentives of no interests and low exchange rates don’t provide them much benefit. The issue is these are often the quick wins of migrating to a challenger bank.

The other side of the argument is that the digitalization of challenger banks is allowing them to keep in closer contact with clients. Has this provided any benefits?

You start seeing the benefits of this, more specifically in countries like the UK and the USA. In Belgium and the Netherlands, we already have a well-developed banking industry. Every bank was made to implement digital services in these regions, and so most of the services that banks provided in person can also be provided in a digital environment.

If we take the example of Starling in the UK, because they were agile, they acted quickly upon change and have done an excellent job of looking at additional services in these exceptional circumstances. But Starling would be one of the few exceptions in the UK, as they are still centered locally. In comparison, Revolut and N-26 have tried to go for scale and, as such, have offered very general services. While a notable strategy, they are not oriented to the local needs of consumers and find it harder to adapt quickly.

Circling back to your question on challenger banks offering better services, it is correct that they do. However, that probably adds more value in less developed banking countries, such as the USA. Furthermore, we are in a global crisis, which has altered our needs more towards cash. The need today is no longer the digital services but rather the money to consume these services. I would argue that digital services are essential, and banks will be investing more in the space, but in the current moment, challenger banks do not hold a significant advantage.

How much of a threat are challenger banks to the incumbents?

In every country, you see incumbents that are performing exceptionally in terms of digitalization. That goes from Rabobank and ING in the Netherlands, KBC in Belgium, to Morgan Stanley and JP Morgan in the US. You have these big players - the front runners – and they steal many of their ideas from the challengers. So, it would be more accurate to say challenger banking as a concept is disrupting the industry. The question remains who will be the winners at the end of the game?

I think challenger banks might hurt the smaller banks that are incapable of following and acting quickly in a changing digital environment. However, I am not sure if they have sufficient enough power to take over the market. As much as challenger banks are talked about, having a new bank with a new business model or a new way of looking at the industry is not new. As such, rather than the technology, it will depend a lot on the markets the challenger banks operate in and the opportunities they find. I think the most significant change that challengers, in general, will have is on the industry.

The market is quite saturated, with a several new companies coming up every year. What are the key products/services that are performing well in the space?

If you take a closer look at the last few years, you will see trends. In the beginning, the focus was mostly on currency exchange and wire transfers that needed to be replaced by faster solutions. Then came SME banking. SME’s did not generate high income for banks and remained underserved, providing an excellent opportunity for challenger banks who could digitalize the process.

Like fintechs, who tend to go for a niche in an industry, challenger banks started similarly, although, at this point, the larger challengers are transforming towards becoming proper banks. Their focus is to look for these additional services to keep the customer happy through the whole financial service journey.

You had mentioned the opportunity for SMEs. Could you elaborate on that further?

In the market of SME banking, there may be a significant change as it is still an underdeveloped market in terms of digital services. It will be an exciting space to keep watching. With COVID-19, we are going to be facing a massive wave of SMEs that will go bankrupt in the coming years. And these SMEs will be replaced by a younger generation which will create a lot of new companies, who in turn will have different expectations than the current generation. It will be interesting to see how the industry is going to deal with that – both from the incumbent and challenger perspective. The agile way of thinking and the development of challengers may be a serious opportunity; on the condition, they keep in mind local aspects.

One concern is that despite positive signs of growth, the revenue and profitability of challenger banks have generally not yet matched expectations. What are your thoughts on this? Should this be a cause for concern?

Indeed, this may be a considerable concern for the industry. The graph below shows that because of COVID-19 challengers are no longer getting the massive growth they need to attract new capital. Between February and March 2020, Revolut’s market growth has dropped 18%, Starling’s dropped 20%, and Monzo’s dropped a whopping 36%. If this continues for the months to come, it will be a severe risk for players who are currently not mature enough to survive based on their existing clientele. The significant advantage for incumbents is that they have the required capital to survive a crisis like this, while challengers are often looking for more capital periodically purely for growth, and that is not sustainable long-term. 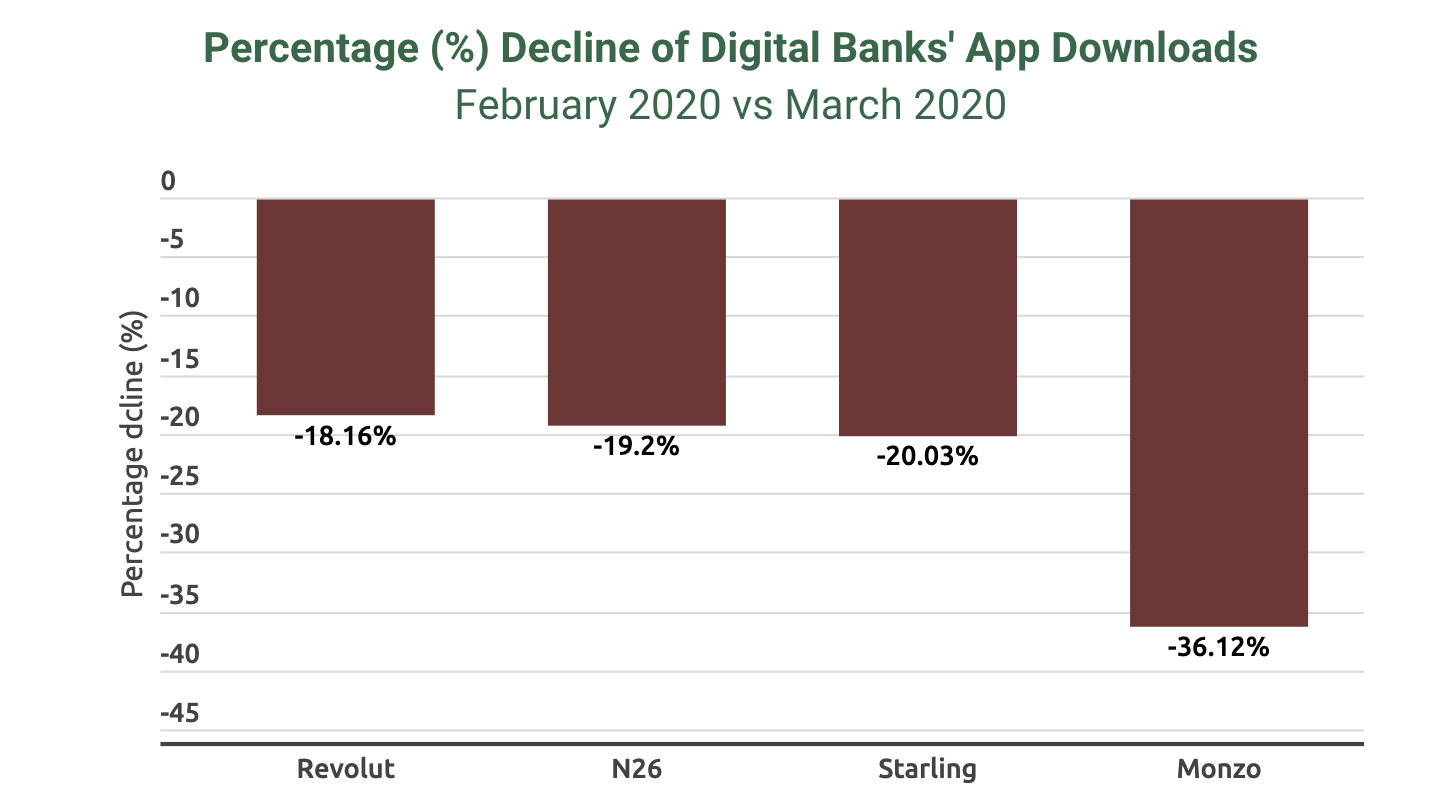 It is going to be a very interesting year to see how the market of challenger banks will evolve. Just like in the fintech industry, there is going to be a sifting. Until recently, there were only winners because there was so much capital, but that is now over. There will be a selection of a few winners, but also be a few losers.

Do you see any change in the direction these challenger banks are taking?

Currently, I think they are hoping it is only temporary, and they can survive with the capital that has already been raised. Although you hear, for example, reports that many C-level people at Revolut have recently left the company. You see some banks that are figuring out how to cut costs in their personnel, some reassessing their P&L, and some finding more creative ways of dealing with the situation. Overall though, no significant changes have yet taken place. In fact, recently, there was still news that Monzo was applying for it's USA banking license. That clearly shows that they are not lowering their expectations for the future.

What changes can we expect in the mid to long-term?

What you see today are investors also figuring out what to do with their money as everything is dropping in value. They suddenly have a higher percentage of riskier investments, which means they have to reconsider their entire portfolio. It will be a lot more complicated for these new players that focus on building on volume to find sufficient cash in the future to expand at the same pace. Investors are going to be a lot more risk-averse. They will be stricter on their investment policy as well.

What we will see in the future is maybe more challengers collaborating with banks depending on how much banking services they provide.

Finally, whom would you say are players to look at right now?

I think it depends on each market. Companies that figure out their purpose and their social relevance, and can really build on that will have a future. In that sense, I believe more in the challengers that focus on a singular or smaller market, such as Starling. Monzo is another example of a bank focusing on a limited number of markets. These companies are focusing more on their product development and tailoring their solutions to local needs.

If we look at Revolut, at the moment, it will not be a mainstream bank in Belgium for the simple argument, but they do not have a Belgium IBAN. Without an IBAN, you cannot have any salary deposits in your account in Belgium, and so Revolut would be relying heavily on their payment service. No bank in Belgium can make money solely on payments – it is a loss-making market, and they need to find their revenue elsewhere. Without the local affinity, your options are limited, so players like Revolut may have to eventually start cherry-picking which markets they want to continue working in.

Taking another example, Compte Nickel in France was highly successful because they had a low fee and easy entry because they were in every store, they were everywhere. This is a model that is very hard for Revolut or N-26 to follow, as they do not have that local network.

In the Netherlands, you have the well-known bank Bunq, but the question arises to what extent they have a critical clientele base. I recalled half a year ago that they had about 30,000 customers, which is not viable for a banking business long-term.

Thank you very much for taking to time to share your thoughts, Rik.

The Banking Scene holds many panels disucssing the banking space. Upcoming events include The AfterWork Summer Event with Chris Skinner, author of 'Doing Digital - Lessons from Leaders'. Take a look at thebankingscene.com for other events.